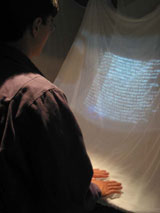 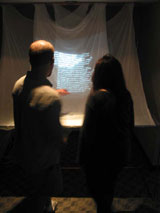 "Technologies are not mere exterior aids, but also interior transformations of consciousness, and never more than when they affect the word."(Ong)

æther is an experiment in how new technologies of representation affect human perception. It acts as a haptic surface for computer mediated visual information to enable tangible experiences common to painting and sculpture, but rare in digital media. The painter sees with tactile vision and translates that experience into a physical movement, after which it exists as a three-dimensional surface, becoming a union sensory of experience. By physically navigating a textured visual space, æther allows for a physical experience of textual information analogous to the visual experience of white-space in a poem. By immersing the experience of reading into a haptic visual space, different ways of seeing are allowed to dynamically combine and separate, giving rise to new forms of visual expression and reception.

The philosopher Marx Wartofsky has argued for a radically culturalist reading of all visual experience. He concludes that "human vision is in itself an artifact, produced by other artifacts, namely pictures." All perception, he contends, is the result of historical changes in representation. (Jay, 5) The visual experience offered by the computer is based on older methodologies (analytic perspective, photography) that have been tacitly learned and internalized with repeated exposure. As Western culture embraces the representational conventions of digital media, one must account for the virtues of traditional media, lest they be lost.

The vision of the painter is described by the words of Cezanne: "Art is a personal apperception, which I embody in sensations and which I ask the understanding to organize into a painting." (Merleau-Ponty, 238) For Cezanne, to paint was to have "... the need to no longer see ... to be too close ... to lose oneself without landmarks in smooth space." (Deleuze, 493) In order to do this, he had to first forget all that he had learned about vision both from science and through science. Visual experience is composed of more than mere perception-cognition plays an integral part. Visually communicating experience requires conscious control over the mixing of what one sees with what one knows. In order to recapture the scene, "all the partial views one catches sight of must be welded together; all that the eye�s versatility disperses must be united;" one must, "join the wandering hands of nature." (Merleau-Ponty, 242)