Palpable City is a site specific installation that transforms an everyday walk through the city into an exploration of a new tactile landscape. Participants wear a vest outfitted with a GPS, some custom hardware and software, and an array of vibrotactile actuators (vibrating pager motors) that are sewn into the vest. As they walk, they encounter varying vibrotactile patterns--changes in rhythm, location or intensity--dependent upon their location. The tactile 'textures' change in relation to the spatial form of their immediate environment. As they walk, and the shape of the 'empty' space around them changes, participants experience new rhythms of the city as tactile sensations generated by the vest.

Participants don a vest outfitted with an array of tactile actuators (tactors), an iPaq with GPS, plus custom electronics. As they walk around the city, they experience varying vibrotactile patterns on their bodies dependent upon their location.

To date, Palpable City has used space syntax-a set of techniques for the analysis of spatial configurations-to genertate maps that play a role in determining locations and changes in vibrotactile patterns. Space syntax started with the work of Bill Hillier and Julienne Hanson in the late 1970s/early 1980s at The Bartlett School, University College London. A wealth of information about space syntax can be found online:


There is a variety of software available to perform space syntax analysis, most free for academic use. I personally am grateful for: 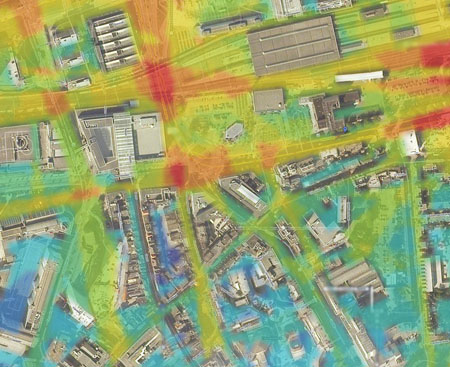 
Palpable City explores the relationship between the abstract and concrete spaces of the city by parameterizing its spaces of representationÐthe space of architects and urban plannersÐwith phenomenal space, to challenge our "lust to be a viewpoint" [1] in understanding the urban experience. The project allows walkers to feel the spatial form of the urban grid at their location as vibro-tactile rhythms on their body. Augmenting the everyday activity of walking the city with a tactile experience challenges participants to think about the interrelation of vision and touch in their experience of space. The void of purely optical space is thickened with palpable sensations, creating a tactile space that can only be explored by moving through it. Tactile displays are usually applied to provide orientation information in unusual phenomenal environments, such as virtual reality, deep sea diving, and zero gravity environments. In Palpable City, this process is reversed; instead of providing a stable spatial reference in unusual conditions, the technology is used to make the usual experience of space unusual.

There are a number of tactile receptors that could be stimulated for use in wearable computing applications: thermal, pressure, electrocutaneous, humidity, air movement, vibrotactile, etc. The current state of the art points to vibrotactile as the modality for ubiquitous computing applications. Vibrotactile actuators are neither intrusive nor painful (problems that are possible with electrocutaneous actuators). They can be felt through clothing, are inexpensive, and have relatively low mechanical and power requirements.

A perceptual illusion, sensory saltation, holds promise for use in vibrotactile displays. Sensory saltation occurs across the senses resulting in the perception of apparent motion. Tactile sensory saltation was discovered in the early 1970s by Dr. Frank Geldard at the Princeton Cutaneous Communication Lab. In a typical setup for eliciting tactile sensory saltation, three mechanical stimulators are place equidistant from each other on the forearm. The stimulator closest to the wrist delivers three short pulses, followed by three more at the middle stimulator, and finally three more at the last stimulator. Instead of perceiving three pulses at each of the stimulator sites, the observer perceives that all of the pulses are distributed with approximately uniform spacing from the site of the first stimulator to the site of the third. (Figure 2) The sensation is described as if a tiny rabbit was hopping up the arm from wrist to elbow, and is sometimes called the "rabbit" effect or the "cutaneous rabbit." (Figure 1) An important feature of this illusion is that it is able to simulate higher spatial resolution than the actual number of stimulators, yet create the impression of a dense stimulator array, thus potentially reducing the overall weight and power consumption needs of a wearable device.

Using variations in these parameters in different spatio-temporal patterns has uncovered a group of concepts which can be perceived through the tactile sense. For example, a single point can be perceived as a direction. (van Erp, 2001) Tactors arranged spatially on the body can create a relationship akin to vision where the ego center is perceived as one point and the stimulus at another, thus creating direction. Taking advantage of sensory saltation, lines can be perceived, as can their length, straightness, spatial distribution and smoothness. (Cholewiak, 2000) There is also some more recent research (TNO Human Factors) that suggests planes and three dimension forms can be perceived. Tactors on the body can create a 360 degree "field of touch" where lines and forms can be perceived not just on the surface of the body, but through the body. Finally, the tactile systems that have been discussed are very easy for users to learn, and require practically no training.


tactile vision+haptic space arises out of concerns about the ways in which new technologies shape our perceptions of space. The computer arises from Western scientific ideology which is built upon the assumption that the mind is separated from the body. The influence of this assumption is present at all levels of the technology, from the architectural level in the hardware/software split to the reduced set of body senses/movements engaged by its interface. The majority of research in human computer interaction has focused on the visual or aural modalities. Very little has been focused on the cutaneous senses. This could be because culturally, the senses of the flesh are regarded as the most lowly, the most animal. They are the farthest away from pure reason or thought, a belief upon which computing is founded: the mind/body split. The mind/body split has been debunked time and time again from all angles: philosophy, linguistics, biology, neurology, cognitive science, art, and even computer science (Dourish). However, embracing what embodiment means is difficult in a language that reifies the ideology. We talk of "my hand" or "my head" as if they are objects that we own, not inseparable parts of our being. To describe what is meant by embodiment, we must use neologisms such as the embodied mind, being-in-the-world, the life-world, etc. An embodied perspective that is not clouded by traces of duality is difficult, at best, in contemporary Western culture. In computer science, where the ideology is ingrained in the technology itself, it presents an even stiffer challenge.

As computing produces increasingly influential cultural artifacts and becomes ingrained in culture, it can no longer disregard the ideologies that have been responsible for cultural production for the thousands of years of humanity's existence. The 'arts' (with a lowercase 'a') have traditionally emphasized body knowledge in the making of things. Embodied thought is important in the design of physical spaces (architecture) as well as in the making of objects. As computing begins to shape physical spaces and their uses, it will be important to look to the arts and architecture to see where the underlying assumptions inherent in the discipline conflict with embodied humanity. tactile vision+haptic space combines technology and the environment through embodied interaction.


Please refer to the written thesis for citations: [pdf]